Note: This article concentrates on the traditional, mostly 4-door Dart of the smog-era. See separate pages about the Dart Sport and Dart Swinger. Links are at the bottom of this article…

The Dart of 1973 received many improvements over the previous year. New brake calipers, a larger wheel bolt pattern and stronger ball joints were a few of the updates. The car was on the 111 inch wheelbase A-body platform.

In 1974, the Dart SE was launched for sale. The SE offered a more plush interior, deluxe hub caps and a standard 3-speed automatic transmission. 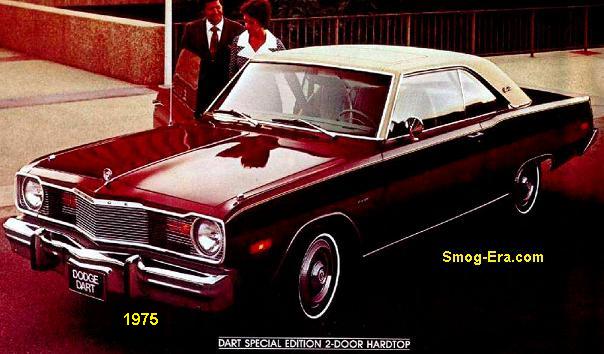 Besides standard family car configuration, the Dart was offered with a Taxi Package until the end. This group added heavy duty seating, rubber floor covering and extra door pulls. Also part of this package were heavy duty brakes & suspension, high output charging system and maximum duty cooling. In the Dart’s last year the taxi group was only available with the Slant 6 for power.

A police package, coded A38, was offered for the Dart’s last year, 1976. This package added a rear sway bar, firm suspension, heavy duty front brake pads, heavy duty cooling, high output charging system, improved interior lighting, as well as a 120 mph calibrated speedometer. This version was even available with a 360 CID 4bbl V8 (220hp), unlike the other 4-doors. The Dart A38 is a rarity nowadays, as they weren’t exactly a sales hit back then.

The Dart was officially replaced by the Aspen, though both were sold concurrently in 1976.