The Mustang was finishing up a generation in 1973. This era (’69-’73) had the longest overall length at 190 inches. Body styles available were a notchback coupe, fastback coupe, and convertible. Trims offered in ’73 were base, Grande, and Mach 1.

For the next generation see HERE.

The Mustang received another extensive redesign for 1979. This time it was based on the Fox-body architecture, which until then was used under the Ford Fairmont/Mercury Zephyr. Body styles were a 3-door hatch or a notchback coupe, with a convertible being available as of 1983. The T-top roof option was available once again as of 1981. 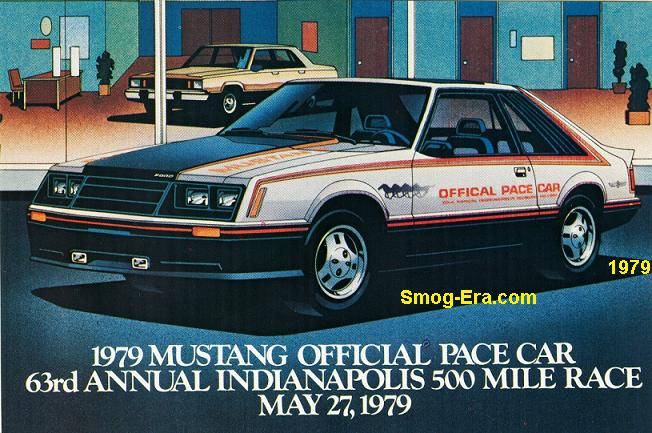 The Ghia trim level returned for 1979, not to mention the base version. And since the Mustang was the official pace car for the Indy 500 this year, commemorative versions of such were sold to the public. The Mustang GT returned for 1982 onward. Also added this year were L, GL, and GLX packages. Turbo GT was available in 1983.

For gearboxes these years, you could shift a 4-speed manual, 4-speed overdrive manual, or a 3-speed automatic. As of 1981, you could also get a 5-speed manual.

The California Highway Patrol purchased over 400 Mustangs in 1982. While lacking adequate prisoner transport space, they were used extensively for special patrol and high speed takedown duties.