Plymouth’s Arrow Pickup was introduced as a companion vehicle to the Plymouth Arrow car. This was in 1979. Like the Arrow car, the pickup was also based on a Mitsubishi product. 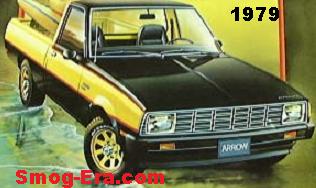 For 1980, the 5-speed gained an overdrive gear. In 1981, air conditioning, power steering and a rear sliding window were added to the option list. Another trim called Arrow Custom was sold starting this year. Basically it was a Sport with toned-downed colors.

In its last year, 1982, another trim level called Arrow Royal was added. This package had many amenities as the Custom but also added a higher payload. The Arrow Truck was replaced by the Scamp in 1983.